This part of the world is pure magic! It boasts two of the top 10 courses in the world and a score of others that are world class. The coastline offers views that are among the most dramatic anywhere and the off course activities are varied, and unique. Our guests love the genuine hospitality of the people and their unbridled enthusiasm for golf. N. Ireland is a must for every golfer’s bucket list!

Ardglass lies just a few miles away from Royal County Down in the small fishing village of Ardglass. Ardglass GC is recognized as one of the most beautiful courses in Ireland and features the oldest clubhouse in all of golf. The club occupies a 14th century castle that originally housed the Fitzgerald clan - the Earls of Kildare. Ardglass is a friendly and relaxed club with a course that is fun, and easier than many of the championship courses in N.Ireland. It’s a welcome respite from the challenge of nearby Royal County Down.

This course setting is simply stunning with the first five holes ranking among the most memorable holes in all of Ireland. With the course playing entirely from high ground, the views Ardglass offers are spectacular. On a clear day, one can see east across the Irish Sea to the Isle of Man and north to the Mourne Mountains that provide the backdrop for the town of Newcastle and Royal County Down. But the course is more than just a pretty face.

The par 3 second hole, known as “Howd’s Hole”, is one of the most dramatic par 3s in Ireland. It plays 167-yards over a massive chasm set hard against the sea and plays predominantly downwind making club selection a perplexing choice for newcomers. Bunkers left and right guard against short approaches and left is not an option as the green is perched alongside the sea and balls hit at the left side of the green will be pitched down to the sea.

Another favorite hole at Ardglass is the par 3 twelfth that plays 198 yards alongside the sea. For those playing a draw, you’ll have to start your shot out over the sea. The tee box is played from higher land the green lies some sixty feet below the tee. There is plenty of room left of the hole but right of the green is dead unless you fancy a swim.

Lying just 5 miles west of Portush, the Portstewart Golf Club boasts three, full 18-hole courses. The crown jewel of the Portstewart three is the Strand Course and it is just a fun, and wonderful test of golf. So much so that it hosted the European Tour’s Irish Open in 2017.

Portstewart’s first hole is one of the finest opening holes in golf with a tee box sited high above the rolling fairway that bends from left to right. The hole plays 417-yards and is a par-4 that gets your full attention right from the start. The course wanders through traditional, towering Irish dunes that frame most of the fairways. These high dunes are blanketed in knee high grass and are this link's greatest defense.

The course requires great imagination to play it well because there are many runoff bunkers that flank the tricky green complexes. When the wind is up, the Strand is a nasty competitor. The par 3s here are just exceptional. The 3rd hole is a one shotter that measures 205 yards from the member’s tees and is one tough customer. What many like most is the variety in the par 3s with short, mid-range and long one shot holes. The course is always testing one’s accuracy with the front nine plating tighter and more difficult.

The club features a lovely clubhouse and a friendly membership. This is one of those clubs where we recognize that being a member of the club would be a real treat. 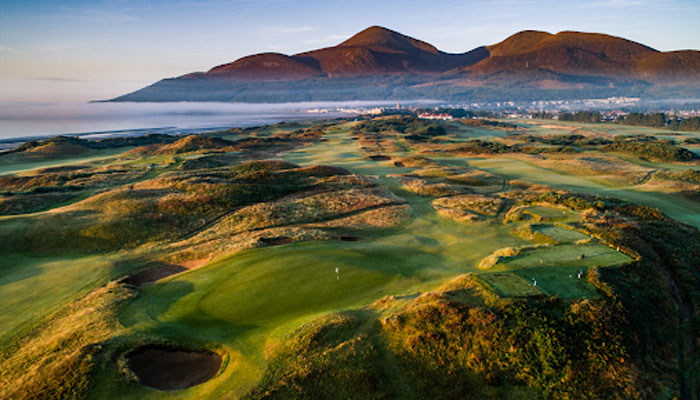 Nestled at the base of the beautiful Mountains of Mourne, lies Royal County Down GC. Originally laid out in 1890 by Old Tom Morris, Royal County Down is a magnificent links currently ranked at #4 in the world and #1 in Britain & Ireland. This is a true championship links that is a wonderful blend of modern golf and a throwback to the original days of links layouts.

Stretching out to 7,200 yards, it’s a real test of golf and a wonder as to why it’s never hosted an Open Championship. The course starts out with a relatively easy par 5 and builds from there. There are a number of blind drives that may bewilder some but we believe adds to the charm and the authenticity of this spectacular links.

One of our favorite holes is the par-3 fourth hole that plays to 213 yards and requires a tee shot from an elevated tee over an ocean of gorse bushes to a green peppered with 10 bunkers. The green itself is long and narrow, rising slightly from front to back with large drop-offs either side and at the back. The ninth hole is certainly one of the most picturesque holes in all of golf. This long par-4 starts with a blind tee shot that needs to hug the large dune on the left side of the fairway to set up the best angle of approach. There are 2 bunkers 50-yards short of the green that are well placed and 3 more greenside bunkers to protect par. The eighteenth is a favorite as well. Another beautiful long hole that is a par-5 that covers 550-yards with 24 fairway bunkers and no greenside bunkers. Playing this magnificent home hole leaves one wanting for another go around the links - you simply don’t want the round to end.

Royal County Down is a very unique and special place for golfers, and a links that all of our guests simply love.

Royal Portrush Golf Course was founded in 1888 and received its royal designation in 1892. It’s the only course off the UK mainland to host the Open Championship and did so for the first time in 1951. Max Faulkner was victorious that year with a winning score of 285. Sixty-eight years later the Open returned to Portrush in 2019 when Shane Lowry won by 6 shots over Tommy Fleetwood and was crowned champion golfer of the year.

The club produces many fine players with Darren Clarke and Graeme McDowell calling Portrush home. This is a true championship links with many brutal holes. The par 3s are particularly tough - most notably the signature sixteenth hole, named Calamity Corner, but locally is known as just "Calamity". This is a long 236 yard, uphill par three played to a green over a huge ravine short and right, with mounds and hollows to the back and left of the green. If you’re short and right on this hole, you’ll understand the calamity reference.

The course sits high on a promontory that juts out into the Irish Sea and offers beautiful views of the sea, and white cliffs to the east. Further east is the Giant’s Causeway with the nearby Dunluce Castle and the Carrick-a- Rede Rope bridge. All three attractions should not be missed and add to the aura of Ireland’s northern coast.

Alongside the Dunluce Course is their second course known as the Valley Course. Like many second courses that sit next to championship courses, they are often overlooked. Don’t make that mistake here. The Valley Course is a wonderful track and is highly rated in it’s own right in N. Ireland.

Be the first to receive exclusive offers and the latest news.

We’ve come to understand that links golf trips to the British Isles are as much about what happens off the course as on the course. That’s why we build experience-based trips that delight and amaze our clients not only with golf but with off-course activities, as well.